Social media and messenger apps are a must-have on any mobile device. Most users cannot imagine contact with the world without their help. These are apps that have completely conquered the mobile market, as evidenced by surveys conducted by GlobalWebIndex and SimilarWeb.

Not only are social media apps the fastest-growing app category, they are also the most addictive for their users.
GlobalWebIndex conducted a study, the main purpose of which was to find the answer to the question of the fastest growing, and therefore also the most popular social media applications. The company surveyed users between the ages of 16 and 24, worldwide, excluding China.

Snapchat a favorite among teenagers

It turns out that the undisputed The winner in the category of the fastest-growing applications was Snapchat, whose number of users over the course of 2022 increased by 57%. It was mainly young users who contributed to the spread of the app, which is also a kind of phenomenon, for none of the other apps have gained as much enthusiasm from teenagers in such large numbers. The percentage of teens worldwide who use Snapchat is 15%. 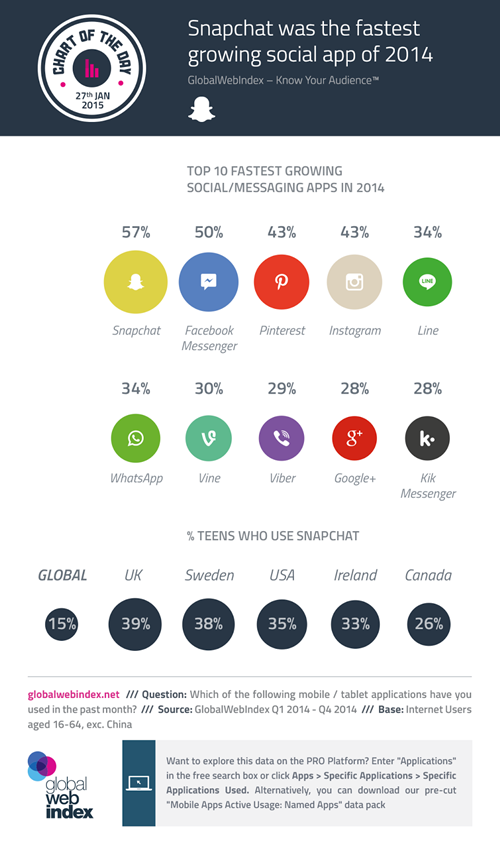 Right behind Snapchat is Facebook Messenger, With an annual growth rate of 50%. Third and fourth place ex aequo went to applications Pinterest and Instagram with a score of 43%. The next places belong to: Line, WhatsApp, Vine, Viber, Google+ and ranked last with a score of 28% Kik Messenger. It must be said that the increases on these apps testify to users’ continued demand for quick, simple, yet creative communication with the world.

Each of these apps is governed by certain different laws, providing different ways to communicate.

It must be admitted that currently there is a veritable “boom” on Snapchat, and accounts on the service are appearing faster and faster. While Facebook Messenger largely replaces simply communicating via email or SMS, and Instagram or Pinterest serve a more creative and aesthetic purpose, Snapchat provides a unique tool for “catching moments” and sharing them with a circle of friends. It certainly serves the purpose of sending very spontaneous, quickly captured photos and videos, which usually don’t have a very fancy message behind them.

In this seems to lie the strength and evasiveness of this application.

The most addictive apps

SimilarWeb, however, decided to face a challenge in checking the, Which apps are the most addictive. After all, the mobile app market is quite complicated, and at the same time, so to speak, „black and white” and most often apps can be divided into two categories: those launched a maximum of 5 times in general and those launched daily (often more than a dozen times a day). Which apps do we run most often?

The survey was conducted in January of this year among U.S. Android users. No one should be surprised by the fact that The first places as to the most addictive apps just went to social media apps: