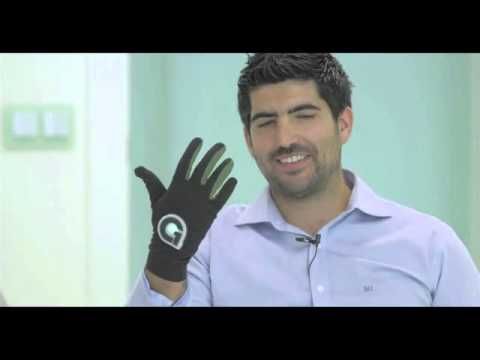 Gloveone will allow us to feel virtual reality?

Projects related to virtual[1], augmented[2] or mixed[3] reality face one big problem: unfriendly, imprecise control with controllers, whose unnatural form often does not allow the user to fully “immerse” in the virtual world. This is the case regardless of whether it is a computer game controlled by an analog controller or a specialized program that requires a high degree of accuracy from the user that ordinary pointing devices will not guarantee. With help come the creators of the project just funded on Kickstarter – the Gloveone glove that allows us not only to control virtual worlds, but also to feel them on our own skin.

Recently, Facebook-bought Oculus unveiled its own virtual reality controller, the Oculus Touch. The hardware has been specially adapted to the needs of this technology, but it must be admitted that no device can replace this most natural controller – our hands. Controller/glove – Gloveone So it seems to be a step in the right direction, just like the Dexmo equipment, operating on a very similar principle, revealed a year ago.

Many were also captivated by Leap Motion’s technology that reads human gestures and transfers them to a computer. The device, which is the main subject of this article, however, has a certain advantage over this competition.

But what is all the fuss about? 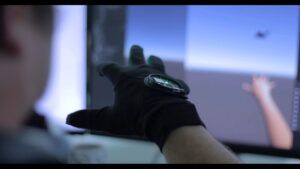 Gloveone from Spanish company NeuroDigital Tehchnologies allows not only to control virtual objects, but also to touch them in a sense! This means, more or less, that when we expose our glove-clad hand under the torrent of virtual rain in question, we will feel it on “our own skin”. In theory, it is indeed very impressive.

However, questions immediately arise: how faithfully the device will reproduce the mass of various objects, their shape (the Dexmo mentioned at the beginning seems more promising in these respects, although less convenient) and how much work in the dedicated device programs will have to put their developers. There are other possible problems, e.g. related to unwanted reading of accidental gestures or delay in transferring movements, etc. A marginal, but also noteworthy, point is that the holograms displayed for us are not, of course, visible to other people, so that waving our hands to move a virtual object, despite all the “romance” of the situation, may look a bit silly to the unaware.

How to feel the virtual?

Ten actuators located on the underside of the palm and fingertips will be responsible for the tactile experience. It will induce vibrations in appropriate areas of the skin surface, which will translate into the sense of touch and allow you to “feel”: resistance, the shape of objects, their speed, mass, gravity – virtual things will even be able to “physically” crush in your hand. The conductive fabric will send information about movements undertaken to the glove’s motherboard, located on the top of the glove, which includes a 9-Axis sensor (which has an accelerometer, gyroscope and magnetometer). It is thanks to it that programs will be able to track our hand in the virtual world.

Gloveone already works with Windows and the SDK development environment, but the development “base” is still to be developed, and the developers are open to working with other technologies. 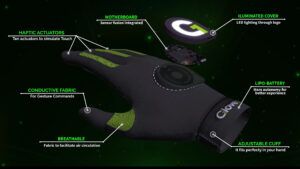 A huge plus of the controller, which we can already talk about, is the lack of obstructive cabling. It’s really “just” a regular glove, made partly of air-permeable, conductive material with Velcro for adjustment at the wrist. The illuminated logo on the top side houses the device’s motherboard. The whole thing sticks out perhaps a bit above the rest of the material surface, but looking at the aforementioned lack of wiring, some compromises are needed.

So far, all we know is that the glove is equipped with a connector for a Micro USB cable, Bluetooth and a lithium polymer battery. However, another question arises here, regarding the length of the glove’s operation on a single charge and how to connect it to virtual reality (at the moment, manufacturers are using other technologies – for example, the aforementioned Leap Motion).

For now, the glove is being tested using the Oculus Rift, as well as on a regular computer screen. However, it seems that there is nothing to prevent it from also being used in augmented or mixed reality as the project develops. Admittedly, Microsoft uses technology that reads human gestures in its Hololens (a new video showing the capabilities of this device has just been presented), and Google Glass allowed users to quite effectively and conveniently control the system through pupil movement and voice commands, but Gloveone – at least in the aspirations of the creators – will allow us not only to control, but also to feel the virtual world.

Looking into the future: perhaps one day we will no longer need gloves, and virtual or augmented reality goggles will turn into contact lenses? 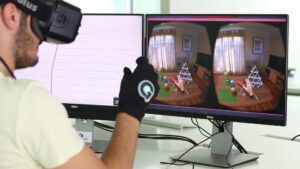 How the glove will perform in practice, we will find out only in November, when, thanks to the success of the collection on Kickstarter (the creators of the project exceeded the threshold of $150,000, allowing to fund further work), the gloves are expected to go into production and then distribution. The price will oscillate around $ 200 per unit. If the design fails to meet expectations, the customer will at least have a very expensive glove.

Perhaps they will work well on a bicycle ;-).
You can read more about the project on the page on Kickstarter or in the information straight from the manufacturers.